Terry owned a cottage at Leigh in the mid-1980s, and much of his time at his weekend stays was spent researching and photographing the history of the area. This led to meeting some of the descendants of the early settlers, and long-term residents. Regrettably most of those who have provided family and local information, diaries, letters and photographs have now passed on.

These included Len and Joyce Wyatt, Norris Wyatt, Rosa Matheson, George and Sybil Buxton, and Roddy and Aileen Matheson. We are all indebted to the generosity of time and material provided that has allowed this information to be recorded.

The original diaries of Charles Septimus Clark were also made available to Terry by Alvin Smith. These provided a wealth of pioneering history for the Leigh and Whangateau area from 1865 to 1929.

The gallery of photos you will view are both original period photos as well as the selection taken by Terry in 1985/86. Many centre around the well used port of Leigh, often with the ubiquitous Northern Steamship Company vessels there.

You will observe the changes to the Leigh wharves, including the gravel skip for loading up the trading scows. The early panorama of Leigh shows the extensive orcharding that took place, which was a big export from Leigh to Auckland on the steamers.

The photos of the Wyatt’s sawmill at Leigh records it in its original position at the head of the Leigh harbour, and latterly its relocation beside the Leigh-Pakiri Road. Terry’s photos record the mill when the original vertical cross cut breakdown saw was still in use. The Leigh Sawmill Café has done a great adaptive reuse of this historic facility.

There is a 1912 photo of the local Maori Chief Tenetahi Pohuehue and his wife Rahui Te Kiri taken beside the monument to their son Willie Brown, who drowned. This monument was located at the Pah Cemetary, North head of the Leigh harbour.

Close to Leigh is Matheson Bay and Ti Point, and some pictures are displayed to capture the early days there also. The homes of some early descendants, the Matheson and Torkington families, are displayed.

The famous builder of the flat bottomed scow, Davie Darroch, lived at Whangateau, Big Omaha, and there are pictures of his home in 1985, when the Buxtons lived there. There is also Davie with a team of bullocks hauling logs to his ship building yard.

The 1985 selection of photos of Matakana convey the sleepy rural atmosphere, quite a different place to the now bustling village. 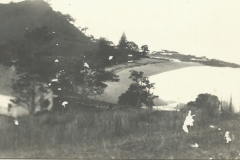 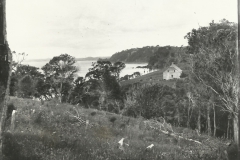 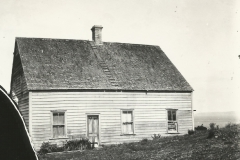 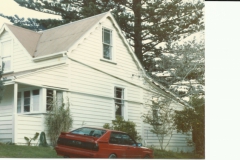