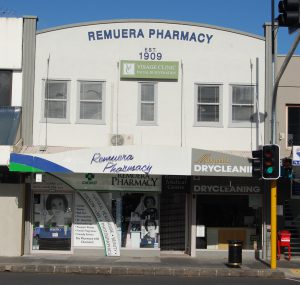 Remuera has become one of Auckland’s’ premium suburban shopping precincts. Several quality pharmacies remain, and about double that number have shut down or been amalgamated. The inspiration for this talk has been to coincide with the Centenary of the first Remuera pharmacy opening in 1909, by F.G.Blott, at 377 Remuera Road.

Remuera Pharmacy has remained in its present position continuing to trade as a chemist for a full 100 years, and it is this feature that makes it truly historic and virtually unique in New Zealand pharmacy retailing.

As we have all witnessed and continue to see, retail precincts are organic, subtly aligning their business use to current needs and fashions. This is seen by the subliminal decline of many of the service oriented shops, that have either relocated to large mall environments or into large chain store franchises or just cannot remain profitable in their original business use.

Whatever the reason, many of our earlier retail businesses in Remuera have vanished, although in most instances the shop remains, often now evolved into how merchandisers perceive our needs (i.e. abundant food & gift lines) not what our needs were 30,50 or 100 years ago.

This is not a treatise on the political/social reasons behind modern retailing. It is more simplistically to record with interest, tinged with nostalgia, the origin and development of retail pharmacy outlets in the greater Remuera district, the history of the shops and their owners. I also hope you enjoy the photos and visual material to support the story.

Street numbers referred to or relate to the period at which the numbers were assigned and over the years there has been a renumbering exercise undertaken to cater for the swelling residential population and increasing retail shops in the area.

The practice of pharmacy by the time of the opening of Blott’s shop in 1909 was quite refined and developed. The Pharmacy Act controlling pharmacists had been in place for 30 year, and Auckland had many well-established pharmacy shops, some already open for 50 years prior to Blott’s. In fact it was one of these, Edsons, that Fred Blott served his apprenticeship.

The residents of Remuera had also enjoyed a long retailing relationship with Newmarket, and especially the patronising of the highly esteemed David Teed, for their pharmaceutical requirements. To get them to break from these allegiances would be difficult.

Click HERE to view the associated articles about Pharmacies & Pharmacists in Remuera.