Memoirs of Launce A. Sutcliffe

My father did his apprenticeship with Spencer Vincent in Christchurch from April 1903 to April 1907. In 1910 he was appointed manager of the UFS Dispensary in Timaru when he was married to my mother and where I was born in October 1910. About 1914 he was transferred back to Christchurch as Branch Manager of the UFS Dispensary on Colombo Street. We lived in Christchurch for a short time but shifted to a lovely old home in Sumner where I started school.

My only clear memory of my school days there is the large horse paddock to accommodate all the pupils horses. Of this I remember the great big horse which brought the four children front the lighthouse every day. To go home the teachers used to stack the smallest in front and the oldest at the rear, slap the horse on the rump and it would amble off up the hill across Taylors Mistake Bay and on to the lighthouse.

I have often wondered what would have happened if one fell off but I never heard of it happening. 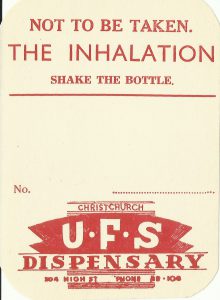 Not for long when we were off again.

This time, to MANAIA in Taranaki – a rural village where the last phases of the Maori Wars were completed in the 1880 or 90.

In the Domain was the watch tower and the remains of the trenches which had still not been filled in – a wonderfully exciting area for us boys to play in.

It would be about 1916-17 when we arrived to take care of the shop for the chemist who was away overseas. The house was a large rambling two storey wooden building with the whole frontage as shop and the rear and upstairs residential. It must have been very old or poorly built because it used to creek and groan particularly at night, to a small boy it was frightening at night.

The shop had a high ceiling and large plate glass windows across the double front and also on the eastern side where there was a vacant section, so the shop was light and airy. The village at that time had a population of 800 and at last census still have about the same number but it was the centre of a heavily farmed area. At that time, and for quite a long time later the Dairy factory, the Kunpokonui Dairy Company was the largest dairy factory in New Zealand at least.

There was no running water but a huge tank alongside and outside the kitchen window with a pipe through the wall into the sink with a low pressure tap. I can remember mother growling that she was always cautioned to watch her use of water because the shop used such a lot.

In the shop was an amazing range of appliances for the use of the chemist. A large cabinet of spectacle frames and lenses with appropriate charts etc for eye-testing, a complete dentist’s armoury which was in steady use. I cannot remember if there was a dentist in the town but dad had a large clientele of Maori men. After a few times wrestling with great big teeth Dad had a rule that all customers must bring with them two big assistants. It must be remembered that anything out of the ordinary was public property and tooth pulling good fun.

The procedure was that a special lounge chair with arms was used for the patient, then one assistant would hold the patient’s head firmly, and the other assistant would extract the tooth under Dad’s guidance. I was always in the front of the audience, it was my father’s shop. The most memorable was when a large Maori came in for an extraction with his two assistants. Dad was a very small man with poor physique which was why he was not accepted for an overseas service. So wrestling out this large molar was quite beyond his ability, in any case everybody enjoyed the performance except, I suppose, the patient.

This particular day the patient was readied and the operator given the forceps and shown the offending tooth.. With much wrestling twisting and grunting and groaning out came the tooth. Dad took one look at it and said that it was a good tooth. The operator merely smiled and went in again, this time he got the right one. The patient never said anything, spat a huge gob on the floor, everybody applauded, the bill was paid and off they went. No threat of legal proceedings for malpractice then.

Things were pretty quiet most days, there was little that could happen, but once again was the large horse paddock the big difference being the number of Shetland ponies for the children. It was all flat country around, so heavy horses were not needed, and also the children could saddle up easily and mount easily except that the little ponies were savage little beggars, they would swivel round and bite or refuse to let the pupil get on so at this school the teachers job was to get the kids mounted and away safely. Mind you the kids all had crops or canes and I’ll bet they took it out on the pony later on.

Then came the Influenza Epidemic which hit the district very heavily particularly the poor Maori who succumbed with heavy casualties. By then mum was able to keep the shop open and if it was something important then dad would be called downstairs to the shop, eventually he was set up permanently in the shop just screened off from the public. Then the World War I ended and Dad brought his first and only shop. The TOWN HALL PHARMACY in Lower Hutt from Mr H.S. Dawe. So while Dad got everything fixed up Mum and I and my sister went to stay with her married sister in Taihape.

Not another school horse Paddock! Yes. This time they were a sleek lot of saddle horses because it was probably a wealthier district, but the pupils came from long distances and it was terribly hilly almost mountainous with few formed roads, you needed good horses.

So to lower Hutt, this time not horses but bicycles, there were bicycles everywhere, it was a lovely flat river valley with no public transport, so it was bike or walk, very few cars then, plenty of buggies and traps.

This shop was well appointed after Mania it was really swept up, but of course we were only 7-8 miles from the Capital. We still lived behind the shop and above it, so except for gas light and solid construction there was still the smell of chemists (iodoform I think). What a change, no longer tooth pulling but animal care. There was another chemist in the Hutt, Mr Wallace James, (his son was a NZ rep cricketer) but as we lived at the shop, dad took over animal care. Pig and deer shooting was the big boys game although there was a fair amount of gun birds, but on Saturday off they would go in shorts, with rifles and pig dogs up the hill track which you could see for miles into the Wainui-O Mata valley which then had only 2 farm houses, across the valley to the Orongorongo’s where there was plenty of game. Usually they would be back about evening with wild pig or venison. Many pig dogs were ripped by tuskers and they were brought to dad to sew up, mostly flesh wounds but I well remember a great big tough man in singlet and shorts carrying a dog wrapped in a blood-soaked towel with the dog whimpering but the man was howling, he was just overcome. His dog was hurt and had to be saved. Well the dog had ripped up his belly wide open and when the towel was unwrapped there was all his intestines exposed. 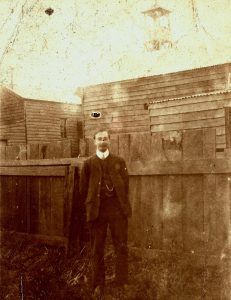 As all this surgery was carried out on a small table in our back yard I was always available to run and fetch what was needed or hot or cold water. Apart from the skin etc being ripped somewhat like an orange no internal injury had been done so it was just a big sewing job, the man carefully covered the flesh and skin and Dad closed it up. He warned the man to tie up the dog in such a way that it could not move its head because it would soon bite out the stitches. About a week later he brought the dog back to Dad to be checked. Bird wings, and broken legs, no troubles as far as a chemist goes.

With chemistry I had little of interest such as I had in Manaia, but I still got a penny a dozen for making and rolling Pillules. This was a rotten job, dad would make up the mix then it was put in a mould and flattened off then the hinged top mould be brought down and cut the mix into small squares which were then taken out and rolled in a pillule box to round them off with an icing sugar coating.

I also got a penny a dozen for making cachets (see illustration). This gadget had a metal base with little caps about the size of a shilling (10 cent piece) with which inserted rice paper little cup with a flange which sat on top of the wafer. You filled the cup with the powder, inserted the rice paper seals in the top portion of the machine, ran a damp squeegee over them then clamped the top down over this seating the power in a sachet, the trouble was they didn’t always seal properly so I often had to do some again, still only one penny. Next washing bottles. Bottles were expensive so they had to be returned, I had to wash them again for I penny a bottle. What a job, hot water and soap, bottle brush then rinse them then put them on the drying rack. Dad would then inspect them, pick them up examining them smell them before I got paid. I sometimes wondered just what some people used these bottles for the stench was awful. Still I usually got enough money to buy lollies on Saturday afternoon to take to the pictures with my picture money of 3d entrance money. 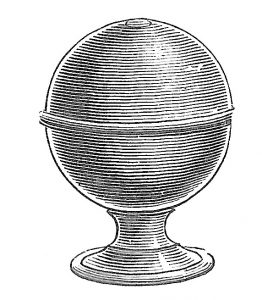 The shop itself was very sedate, racks and shelves of polished mahogany drawers and boxes with Latin names of the contents all to be viewed by the public who could sit at the counter and have a chat while their mixture was being dispensed. It was also fairly private with a big mirror on a stand protecting the purchaser from the public gaze anyway. The only thing that appealed to me was the great big gas lamp outside the shop under the veranda. It had 5 or 6 burners inside with a pilot lamp always burning, the problem at first was to use a long pole with a hook on it to pull on the gas lever on the outside, if you were feeling well, had a good grip on the pole, had the hook in the lever hole and the wind was not blowing too hard, then it would light, but if you missed BOOM all the mantles could be blown off and you would have to get the gas man to bring a long step ladder to replace them. My father was a gentle kind man but this lamp tested his cool. I never risked it.

Unfortunately in 1926 Dad was involved in a motor accident from which he never recovered although he was an innocent party, and so at 16 my experience of chemists ceased. Ralph King took over the shop.