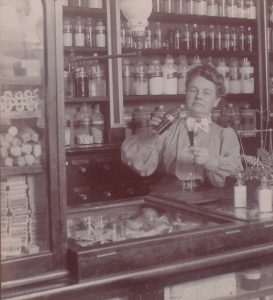 Thomas Gillman’ s daughter Augusta Kezia Gillman, was registered as a Pharmaceutical Chemist (No. 536) on the 13th day of March 1899, her qualification being a Dispensing Chemist in New Zealand prior to January 1st 1899. She is believed to be the first woman in New Zealand to hold this qualification (not first registered pharmacist.). 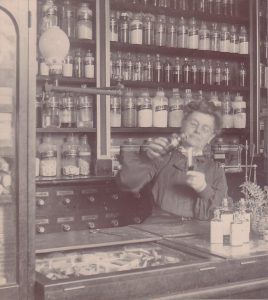 Augusta and family came to New Zealand in the ship “Anne Wilson” which arrived in Auckland in 1863. Two of her brothers aged ten and six died of scarletina on the voyage. Augusta aged two was also pronounced dead from this, and was bound up in a canvas bag ready to be slid over the ship’s side when, according to the story, her father said “That child is not dead”. Sure enough she was found to be alive. It seemed that Augusta had trouble with her ears (it persisted all her life). When they discharged there was a distinctive smell. Thomas Gillman noticed this smell at the moment she was to be buried at sea. Augusta lived to be 67 years old.

Augusta resided above the shop in Onehunga. Thomas Gillman and his family lived down Church Street, at the west end of the pharmacy. Well remembered by customers was the taste of their special ‘Influenza mixture’, which had a good sale for many years.

Together with her father they ran the business and their family used to tell them, pointing to the bottle labelled ‘Aqua. Distil. ‘ that that was where their profits came from. They made among other novel contraptions, flypapers, spreading castor oil and resin on greaseproof (or maybe parchment paper). But sticky, it was. The pharmacy had a little back room between the shop and Augusta’s kitchen, with a couch where Mr Gillman was want to rest in between whiles. (Albert, a younger brother of Augusta’s, also a chemist, kept up the couch tradition but went one better. He placed a mirror in a position to show from his place on the couch, whoever entered the shop. If only an acquaintance dropping in for a chat, well, no need to get up).

A rather different service offered by the Pharmacy was the arrangement with the harbour­ master’s office to send him twice a day seven days a week, the names of ships arriving and departing and the respective sailing time in each case. By this service, inquirers were not required to make a long trudge to the wharf for information, the shipping notice in the Medical Hall porthole furnishing all the necessary details. “Gillman’ s porthole” was a boon to the townspeople.

Thomas and Augusta Gillman created an impressive father and daughter business in the bustling West Coast port town of Onehunga for almost 45 years.

All 3 pictures of Augusta are dated 1907, and are originally in stereoscopic form.