This coal and firewood business was owned by my father, Launce Sutcliffe in the 1960’s.

The business building was a large vertically run corrugated iron structure, which was built right up to the footpath on both streets. It was a single level building, although the main structure was elevated off the ground by about 3’6’’ (1m) to allow for the height of the tray of a truck when it reversed in to load or unload.

The small office that was located on the building was on the corner of Greenlane Road East and Nolan Avenue. This always seemed dark to me, with its few high windows on the Nolan Ave side, and its own separate front door opening onto Greenlane Road East. There was the standard office furniture of the day, dark wooden desk and chairs, filing shelves, and lots of papers and dockets everywhere. My most vivid recall of this room was the series of dog paintings, all being dressed up in human clothing, sitting at the table, and playing poker. The frames were made of heavy dark oak. These painting constantly fascinated and bemused me.

At the rest of the office was a small flight of 3 to 4 stairs going up to the elevated building floor level for the work and storage space. The rest of the building, was also very dark, virtually no natural light, and minimal electrical lights were used. The floor was of long run timber, and there was a film of coal dust coating everything, and then lots of saw dust on the floor around the saws.

Most of the firewood was Ti Tree, and this was brought in by Hancock’s trucks to the loading bay, moved onto the building floor and as close as possible to the circular saw. This whining 4 foot diameter circular saw still sends a fear into me; it was just such a frightening device to a pre- teenage boy. I was never allowed near it, but stood back mesmerized watching the men, mostly always blackened by coal dust and covered in sawdust, laying up the Ti Tree logs on the bench and then manually pushing them into this fearsome screaming blade. Piece after piece, the long log was dismembered, but occasionally a knot was hit, and there was a log flying off somewhere. This process was very captivating but it was redolent of the Victorian industrial era of powerful dangerous machine interfacing with human endeavour.

There were steel tripod sack stands around this saw, and it was my job to pick up these cut pieces of Ti Tree and put them into the large hemp sack that was fitted onto the top of the spikes of the stand. Once full, one of the men would release the sack from the stand and wedge the handcart under it and wheel it off to a section of the building and stack it up high.

In stock piling for winter, huge piles of uncut Ti Tree logs were kept outside at the rear of the building, and I believe access for this was through a large gate on Nolan Ave. 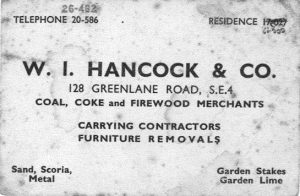 The business was bought as an existing operating one, one of the workers that I remember was a a kind hearted middle aged man, Bert Sherman. I remember him sometimes calling it our place at Merivale Ave in his very smart 4 door MKI Ford Zephyr. Bert mostly drove the trucks, and did deliveries.

W.I. Hancock had a “fleet” of trucks; I remember the older Commer and the newer Austin. Both were painted red, with the business details on the door, and had flat-bed trays.

One trip I did with my father was to a section of bush at Te Kauwhata, and I rode so proudly with him, high in the cab. My father always cut a dashing figure, with his small clipped moustache, and his ever present beret, or Tam O’Shanter. But my embarrassment came when we were returning to Auckland, fully loaded with many lengths of Ti Tree strapped high onto the tray. Going northwards over the old Great South Road hill at Pokeno, our speed continually decreased. Dad double de-clutching down gears to try keep moving, but then all fell apart when steam emanated from the bonnet, and the poor over-worked Commer engine had overheated.

We pulled to the side of the road, Dad tinkered under the hissing and steaming engine, and after waiting quite a long while and putting some cold water into the radiator we very slowly completed our ascent of the Bombay Hills, whereby once over the crest we were able to amble along back to the yard.

This Commer also held my fascination with its signalling device, a mechanical metal arm with an articulated yellow hand attached that was fitted onto the driver’s window frame. To signal a turn right, the top of the arm was pulled into the cab, meaning the rest of the arm shot out horizontally into the street, the yellow hand at the end indicated a right – hand turn was to be done. This sophisticated device also had a button on the driver’s end that moved the hand up to 90 degrees to show the hand in a stop position, so captivating…

Mostly through the week the trucks were out on the road around Auckland doing deliveries, and I recall all of the drivers having their delivery dockets given to them for their daily calls, and the truck then being appropriately loaded with the bags of the Ti Tree firewood, Coal, Carbonettes, Coke, Raycarbo etc.

The men were obviously all very physically powerful types, and wore heavy bullock-hide sleeveless vests/jerkins. These were worn to soften the sharp edges of coal and timber against their shirts. One of these men was in fact my older sister Vivienne’s husband, Kees Van Boxill. He was a good 6’3’’, and very powerful, and over the years he ended up taking over W.I Hancock from my father.

Even in these days, Greenlane Road East was very busy, and I recall Dad going out into the middle of the road and halting all the traffic when one of his trucks arrived, as they had to reverse the truck into the truck bay. This was not easy with a full, high load, and Dad would be in front of the cab on the road guiding the driver to reverse in, without him hopefully not hitting either side of the building. There was always a lot of shouting and pageantry with this, and my father was never a quiet person, having being used to shouting out orders in the Army, where he had risen to be a Captain of Artillery.

W.I. Hancock’s premises were only about 100 yards away from the main trunk station at Greenlane, and where railway trucks of coal were put into the siding for unloading. This meant the use of 100’s of hemp sacks, many of the steel tripods taken down, and lots of large square mouthed shovels. This was heavy taxing work, and many tons of coal were sacked up, then lifted onto the tray of the truck, and stacked 3 high. Once there was a full load, it was a short drive down road, reverse into the truck bay, and unload it all again. Wow, these guys earned their pay.

W.I. Hancock also was involved in Civil Earthworks Construction, and provided bulldozer and trucks for the building of the water reservoir at the corner of Symonds Street and Mt Eden Road intersection. Also trucks were supplied for the road work construction for the building of the Southern Motorway. W.I Hancock had an account and got all their vehicle servicing and petrol at Lay and Roger’s garage, at the top of Farmer’s Hill, 137 Great South Road, Greenlane. I recall an elderly white haired older man, Mr Rogers I believe, who always wore a ¾ length white coat, and mostly worked in the office, and also on the forecourt.

The earliest newspaper advertising I can find for Hancock’s business was on 26th June 1943. The Wises 1944 directory lists the building, and also mentions William Hancock, coal merchant residing at 237 Great South Road, Greenlane.